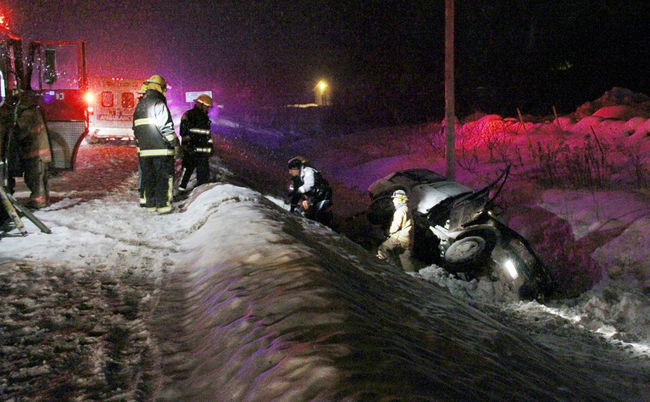 In late March, a few springs ago, at the hour of 11 p.m., I was three quarters of the way to work (a 45 minute drive).  It had been freezing rain for a bit when I left home, and, as I got further north, it intensified to the point that driving was becoming pretty hazardous. I was sliding and fishtailing on the paved road, and my remarkable powers of reason told me it might be a good idea to get onto one of the dirt sideroads instead, thinking that there would be more traction.  Bad choice.

After a couple of minutes, I was going down a steep grade just as slippery as the pavement.  My first impulse to put on the brakes was about the worst thing I could have done.  My van began to drift sidewise, and, after a period of panic steering, I hit the ditch and rolled over.  They say that time slows down when you are in extremis.  I can testify to that, in a way, as I clearly remember individual weeds and small bushes imprinting their images in my mind as I gave up control and spun at the mercy of chance.

Mercy indeed was given to me.  I had rolled onto my roof, breaking the windshield and side windows, but, thankfully, the vehicle settled back down on its side.  The first thought, of course, is to get the hell out as quickly as possible.  I hadn’t suffered any injury, and I remember climbing towards the passenger window, rolling it down, and finally extricating myself.  At that point, I felt pain in my leg, but I think it was only a pulled muscle from the unconscious effort of bracing myself, then having to do the climbing out.

In a state of shock I must have been, because I do remember doing an odd thing:  walking through the knee deep snow, trying to gather up some of my personal possessions that had been ejected from the van:  a jug of windshield washer, some cassette tapes and CDs, my hat.

That is how a married couple found me some time later.  Wandering along the roadside with an armful of stuff.  They had seen the vertically stacked headlights and the steam coming from the engine.  They drove me to the nearest phone booth (no cellphones then) so I could call the Police, who then arrived and took control of matters.  One of the two officers  was of a mind to charge me with careless driving and leaving the scene of an accident.  The other simmered him down and called a tow truck for me.  They offered to take me to hospital to get checked out, but I assured them I was okay.  They returned to the scene of the wreck, but would not venture down the hill.  We waited an hour for the tow truck, and they bid me adieu, after doing their report.

My van was slowly winched onto their flatbed truck, and I was heading back home.  We stopped at a phone booth and I called my wife and my work.  By this time it was about 1:30 in the morning.  We made it home by about 2:30, and they took my van away to their yard.  I opened my front door to a hug from my wife, and a crying ten year old daughter.  My son had slept through the whole ordeal.