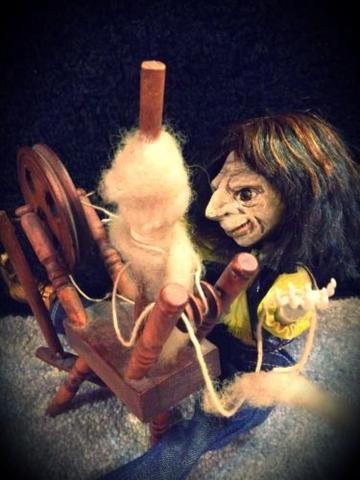 He waits for me, each night,
of late,
in the cottony caves ‘twixt longer dreams.
The script:
I’ll be born once more from ectoplasm,
and flutter down on nightwings,
like settling leaves in the cease of the breeze.
He knows I come.
That I can’t stay away.
But I always wish to startle him,
so I slide,
a form of translucent grey,
across his stalactite ceiling.
But he smells me
and smiles a slow smile.
Bovine, feline, canine by turns.
In the voice of The Rock Biter, he says
PULL UP A CHAIR.
Of what form will he be tonight?
Sometimes, we play the name game.
Threenight ago, he was ratlike, but stood erect.
In his black top hat, he spoke sneering syllables,
saying he had eaten five pies and I was to guess his name.
His scaly tail twitched and whipped,
and his sharp yellow teeth champed at the bit
until I said
nimmy nimmy nit not, your name is Tom Tit-Tot.
His eyes grew wide and bloodshot,
and he reached forth with chickenfoot hands.
Screeching in the rat language, he ran about,
like a balloon let go and blubbering out its air.
And impaled himself upon a stalagmite.
I went home.
Just last night, he was all in white feathers,
and was duck-billed.
He wore a blue vest with brass buttons,
and had a sailor’s cap.
I said Where are your pants, Donald?
Whereupon he let out a loud quaaaack,
and pounded on the table.
Whereupon all things bright and beautiful winked out.
And tonight?
Ah yes, tonight.
I must tell you this, writing as it is, from the Seventh Circle.
Tonight, I parachuted as usual, down from his spiny ceiling.
All is damp dripping darkness,
but, in a far corner, there is a golden light.
I hear a rhythmic squeaking, and someone hums along with it.
There sits a small creature, sitting on a stool beside a spinning wheel.
Piles of gold surround him.
PULL UP A CHAIR!  it says.
We’ve much to discuss!
Topics of import, like
is tea better than coffee?
is an apple better than an orange?
what happens to a bubble if it is left to float undisturbed?
if you collect the powder from a moth’s wings,
can you be made to fly?
We mull it over.
Prevaricate.
Debate.
But, it is tiring, discussing such worldly things.
There are no clear answers.
We begin to yawn widely, ready for the second sleep.
I say By the way, you look a little rumpled tonight, Stiltskin.
Whereupon he takes off his pointy hat, throws it at me,
and stamps with one foot on the stony floor.
Our world bursts asunder, and our feet go from under.
Into abyss we tumble, grabbing and grappling,
but all is gossamer.