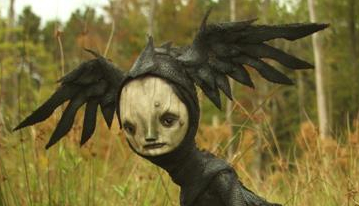 The folding of Cain Coven (5)

Merylyn and Elfeena became used to the customs and people of Gryndal, and helped as they could with the coven’s work.  Some few of the women were slower to accept the girl than were others, but her mild manners and willingness at chores served, in the end, to endear her.  She had, at times, some curious ideas as to how things should be done or could be improved, but was never ostentatious or arrogant in presenting them.  Indeed, her quietness sometimes made one listen to her more closely, and she had a way that made the women think that these new ideas were their own.  The girl smiled her smile when a group discussion took place and the ideas were bandied about.

Merylyn did much of the hunting for game, since she was an accomplished trapper, and many days they had fresh rabbit or even a wild turkey or two.  On a time, she spotted a large hare and resolved to trap it.  It was very fast, and she had laid out a number of snares before it was finally caught.  She was home in time to clean and dress it for their supper, when, on close inspection, she felt an oddness about the animal.  Its eyes were not right, but it was not from illness.  As she made her cuts to do the skinning, its veins and arteries stood out more than they should have, and, most peculiar, its blood had a greenish cast to it.  The gutting gave her the real shock, for the rabbit’s stomach held a hard object.  As Merylyn rinsed away the offal, she saw it:  a small golden medallion.
It was the symbol of Cain Coven.  She quickly stowed it away, and told the sisters that her catch was diseased, could not be eaten, and was to be burnt in the fire.

Some days before, over many hills and paths, the Sisters of Cain, aware that their attack on Merylyn had failed, placed a spell of finding and of withering in the gullet of a hare.
For they had seen Merylyn’s changes as the work of the devil, and were in fear lest she return.

Seeing that her mother was quiet and withdrawn at the night’s fire, Elfeena sat by her, stroked her hair, and drew her pale lips to Merylyn’s ear.  “Mother, I see you have a sickness.  You shall tell me, for you know who I am.  Tonight, I will not leave your side.”